"Around the World" is a song by the French electronic music duo Daft Punk. It appeared on the duo's debut album, Homework in 1997 and was released as a single the same year. It became a major club hit around the world and arrived at #1 in dance charts. The song is known for its only lyrics being "Around the World". It is also known for its music video, which was directed by Michel Gondry and choreographed by Blanca Li. In October 2011, NME placed it at number 21 on its list "150 Best Tracks of the Past 15 Years".[1]

The key hook is a steady bassline and a robotic voice singing "around the world" in continuous chains. Daft Punk recalled that the song "was like making a Chic record with a talk box and just playing the bass on the synthesizer".[2] The phrase occurs 144 times in the album version and 80 times in the radio edit. It is composed in the key of E minor (aeolian), while the bass line is in the A dorian mode; Both scales are derived from the natural G major / E minor scale.

Upon analysis of the song, Michel Gondry noted its distinctive structure: "I realized how genius and simple the music was. Only five different instruments, with very few patterns, each to create numerous possibilities of figures. Always using the repetition, and stopping just before it's too much." He also noted the similarity between the bassline of "Around the World" and that of the Chic song "Good Times".[3] 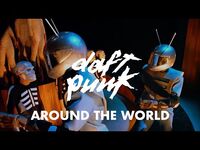 Michel Gondry's music video for the song features four robots walking around in a circle on a platform (which represents a vinyl record), four tall athletes (as described by Gondry)[3] wearing tracksuits with small prosthetic heads walking up and down stairs, four women dressed like synchronized swimmers (described by Gondry as "disco girls")[3] moving up and down another set of stairs, four skeletons dancing in the center of the "record," and four mummies dancing in time with the song's drum pattern.

This is meant to be a visual representation of the song; each group of four characters represents a different instrument. According to Gondry's notes,[3] the robots represent the singing voice; the physicality and small-minded rapidity of the athletes symbolizes the ascending/descending bass guitar; the femininity of the disco girls represents the high-pitched keyboard; the "itchy" skeletons dance to the guitar line; and the mummies represent the drum machine.

"Around the World" was Gondry's first attempt at bringing organized dancing to his music videos. "I was sick to see choreography being mistreated in videos like filler with fast cutting and fast editing, really shallow. I don't think choreography should be shot in close-ups."[4] The sequence, initially developed by Gondry, was further expanded and streamlined by choreographer Blanca Li. Costumes for the video were designed by Florence Fontaine, the mother of Gondry's son. The flashing lights were operated by the director's brother, Olivier "Twist" Gondry. As Michel Gondry stated, "It all came down to a family affair."[3]

Elements of the music video appear in the video for the LCD Soundsystem song "Daft Punk Is Playing at My House". The overall design has also been replicated for the Freemasons' "Rain Down Love" video.

To celebrate Homework 's 25th anniversary, a series of videos were re-released through YouTube on April 2022, taken from the "D.A.F.T.: A Story About Dogs, Androids, Firemen and Tomatoes" DVD. These inclduded a storyboard sequence from the pre-production, and a video explanation from director Michel Gondry, and a remastered version of the music video.[5]

"Around the World" was featured in one episode of first season of MTV animated series Daria.

It was also used in the video game Dance Central 3.

"Around the World" is mixed with Young MC's "Bust a Move" in the video game DJ Hero.

"Around the World" is used in trailers for Rayman Raving Rabbids 2. From Ubisoft 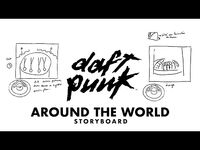 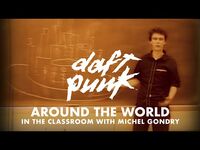 Daft Punk - Around The World (In The Classroom with Michel Gondry)
Michel Gondry explaining the music video. 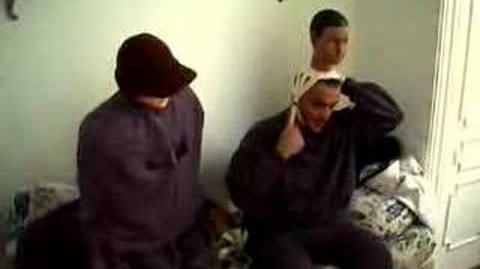 Daft Punk - Around the World - Making the Video
Making of the music video.