View source
watch 01:36
We're Getting Mutants in the MCU - The Loop
Do you like this video?
Play Sound

"Fresh" is the sixth track by Daft Punk from the album, Homework. The length of the song is 4:04.

The track starts with sounds of ocean waves, then a guitar riff starts, as beats and a sample from vocals starts to fade in. The song ends with the beats, the guitar, and the vocals fading out, while the ocean waves are still heard. 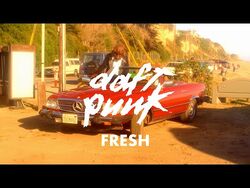 A music video was made for the song, which follows the story of Charles (the main character from the "Da Funk" music video).

The music video shows Charles filming a scene for a movie when it finished he discusses techniques with the director (played by Spike Jonze), he then goes with Beatrice; his girlfriend. They decide to dinner at a restaurant and then they drive off in a red car, as the sunset goes out.

The video was directed by Daft Punk themselves. Spike Jonze played Charles' film director, which is a discreet nod to his previous work on "Da Funk" music video. According to the D.A.F.T.: A Story About Dogs, Androids, Firemen and Tomatoes audio commentary, Daft Punk saw that fans took Charles' story depressing, so they made the Fresh music video to show him happier, and to cheer up the fans.

A remastered version was published on YouTube during the 25th Anniversary of Homework in 2022, along with a video showing the storyboard and an audio commentary available to the public. 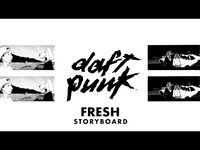 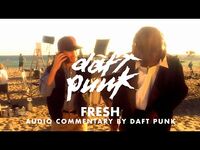