Thomas Bangalter (born January 3, 1975) is a French musician best known as a former a member of Daft Punk. He is the younger of the duo.

He was born in Paris, France, to French songwriter and musician Daniel Vangarde and Therese Thoreux. He began playing the piano at the age of six. Bangalter stated in a video interview that his parents were strict in keeping up his practice, for which he later thanked them.[1]

He met Guy-Manuel de Homem-Christo in 8th Grade at Lycée Carnot Public Secondary, the high school they both attended, the two bonding over shared interest in music and films from the 60's and 70's. They later started an indie punk band with Laurent Brancowitz called Darlin' where Thomas played the bass. After becoming disillusioned with the rock scene at the time, Thomas and Guy-Manuel split to start working on electronic music as Daft Punk as Laurent went to start Phoenix.

Bangalter currently resides in Beverly Hills, California along with his wife Élodie Bouchez and their two sons, Tara-Jay and Roxan.

Thomas owns a music label called Roulé. The label released singles by Romanthony, Roy Davis Jr., and Bangalter's own solo material among others. Bangalter's solo works were released on two vinyl-only EPs titled Trax on da Rocks in 1995 and 1998 respectively.

He was a part of Stardust, a collaborative effort consisting of producers Thomas Bangalter, Alan Braxe, and singer Benjamin Diamond. Stardust released their only single, "Music Sounds Better with You" in July 1998, through the Roulé label.

Bangalter co-produced Bob Sinclar's second single, "Gym Tonic". The single caused a minor dispute as it contained samples from a Jane Fonda workout tape, which led Fonda herself to refuse permission for the single to be released officially.[1]

Bangalter produced the score to the film Irréversible, released in 2002, which featured a majority of songs from Trax on da Rocks.

He was a member of Together, who released the single "So Much Love to Give" in 2003. 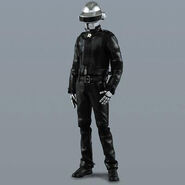